Raja Ravi Varma (29 April 1848 – 2 October 1906) was a celebrated Malayali Indian painter and an artist. He is considered amongst the greatest painters in the history of Indian art.

His works are held to be among the best examples of the fusion of European painting techniques with a purely Indian sensibility.

Shopping : Buy Raja Ravi Varma’s paintings online by clicking on the above images

While continuing the tradition and aesthetics of Indian art, his paintings employed the latest European art techniques of his time.

Secondly, he was notable for making affordable lithographs of his paintings available to the general public, which greatly enhanced his reach and influence as a painter and a great public figure.

Indeed, his lithographs increased the involvement of common people with fine arts that lasted for several decades. Particularly, his depictions of Hindu Gods and Goddesses and episodes from the Ithihasas and Puranas have received profound recognition from the public, and are found, often as objects of worship, across the length and breadth of India, especially his paintings of ‘Hindu Goddess of wealth Lakshmi’, and ‘Goddess of knowledge and learning Saraswathi’.

Would you like to possess some of these immortal paintings of Raja Ravi Varma? Here are some presented underneath, for you to choose from, for your convenient purchase :

Here are a few stunningly beautiful paintings of Raja Ravi Varma, collected from multifarious sources, with heartiest thanks to the artist and the photographers : 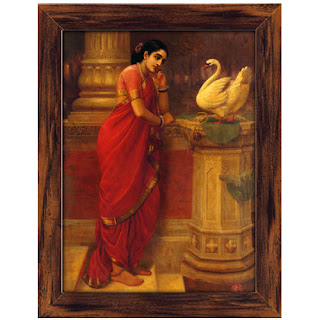 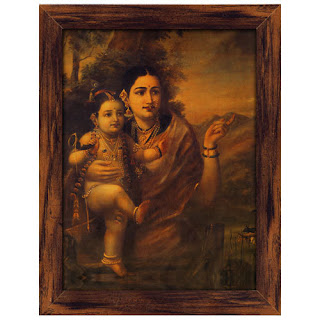 Raja Ravi Varma belonged to the Royal Family of Travancore of the present day Kerala state in South India.

Ravi Varma was patronised by Ayilyam Thirunal, the Maharajah of Travancore and began formal training thereafter, learning the basics of painting initially in Madurai, and later water-painting under Rama Swami Naidu, and oil-painting under the Dutch portraitist Theodor Jenson.

Ravi Varma received widespread acclaim after he won an International Award for an exhibition of his paintings at Vienna in 1873. Varma’s paintings were also sent to the World’s Columbian Exposition held in Chicago in 1893, and he was awarded three gold medals. Many of his fabulous paintings are preserved at Laxmi Vilas Palace at Vadodara today.