Adi Kumbeswarar Temple, Kumbakonam is a Hindu temple dedicated to the Hindu God Shiva, located in the holy town of Kumbakonam in Thanjavur District Tamil Nadu, India. Shiva in this temple is worshiped as Adi Kumbeswarar, and is represented by the lingam. His consort Parvati is depicted as Mangalambigai Amman. The presiding deity is revered in the 7th century Tamil Saiva canonical work, the Tevaram, written by Tamil saint poets known as the Nayanmars and classified as Paadal Petra Sthalam. 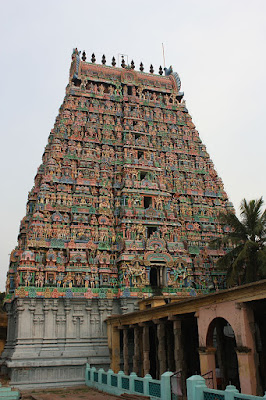 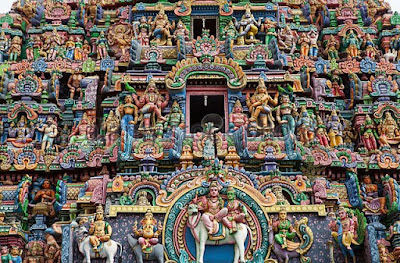 The temple complex covers an area of 30,181 sq ft and houses four gateway towers known as Gopurams. The tallest is the eastern tower, with 11 stories and a height of 128 feet. The temple has numerous shrines, with those of Kumbeswarar and Mangalambigai Amman being the most prominent.
The temple complex houses many halls; the most notable is the sixteen-pillared hall built during the Vijayanagar period that has all the 27 stars and 12 zodiacs sculpted in a single stone.
The temple has six daily rituals at various times from 5:30 a.m. to 9 p.m., and twelve yearly festivals on its calendar.
The  Mahamaham festival takes place once every twelve years during the Tamil Month of Masi (February – March). This is the time when millions of pilgrims from various parts of India visit Kumbakonam to take a holy dip in the sacred  Mahamaham tank which is located in the heart of the holy town.
The temple is in existence from Chola times of the 9th century, and has been maintained by Nayaks during the 15-17th century.
Spread India's Glorious Cultural & Spiritual Heritage