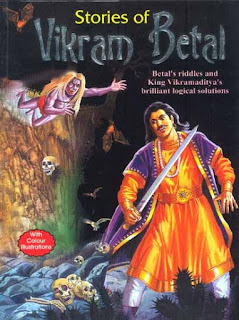 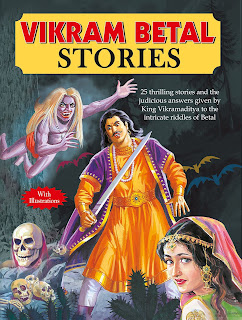 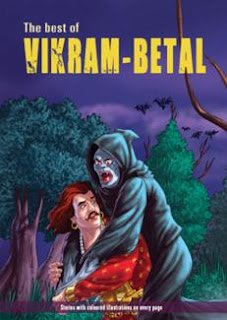 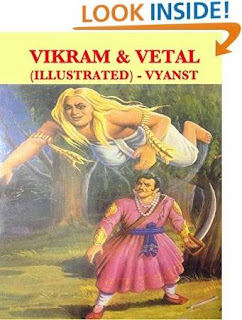 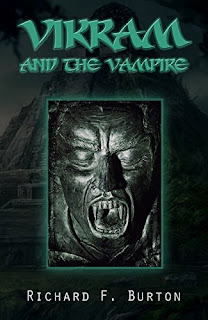 Vikram and the Vampire (Illustrated) by Richard F. Burton and Ernest Griset on Amazon

‘Vikram & the Vampire’ on Amazon India, including books by Sir Richard Burton : Click to buy
Vikramaditya was a legendary emperor of ancient India. Often characterized as an ideal king, he is known for his generosity, immense courage, and patronage of scholars.
According to popular tradition, Vikramaditya began the Indian era Vikrama Samvat in 57 BCE. Other scholars believe that Vikramaditya is a mythical character, since several legends about him are so fantastic in nature.
Whatever said and done, ‘Vetala Panchavimshati’  is a collection of enjoyable ancient stories of immense wit & wisdom, and of course courage too, and is a MUST READ for children & grown-ups alike. In fact, in this 21st century, we should have fun-filled cartoons and animation movies made for children, based on such witty & wisdom-rich stories written by the wise ancients, for imparting practical wisdom, courage & quick wit to the readers, instead of showing the children some silly show or serial  just for pure entertainment, where one gains nothing other than giggling for a few minutes, and of course some amusement.
The Vetala stories are extremely popular in India, and have been translated into many Indian languages. Several English translations too exist, based on the original Sanskrit literature, and also basedon Hindi, Tamil, Bengali and Marathi versions. The best-known English version is perhaps that by Sir Richard Francis Burton which, however, is not a translation, but a very free adaptation.
Here is a List of the 25 Vetala Tales from Vetala Panchavimshati  taken from the Grand & Inexhaustible Sanskrit literature of India.
The legendary king Vikramāditya promises a Tantric sorcerer that he will capture a Vetala , a celestial spirit, a Pishacha, a Vampire in the language of Western literature, who hangs upside-down from a tree and inhabits and animates dead bodies.
King Vikrama faces many difficulties in bringing the Vetala to the Tantric. Each time Vikrama tries to capture the Vetala, it tells a story that ends with a riddle. If Vikrama cannot answer the question  in the riddle correctly, the Vampire consents to remain in captivity. If the king knows the answer but still keeps quiet, then his head would burst into thousand pieces, warned the Vetala. And if the King answers the questions correctly, the Vampire would escape and return to his tree. Vikrama knows the answer to every question. Therefore the cycle of catching and releasing the Vampire continues twenty-four times.
During the twenty-fifth attempt, the Vetala tells the story of a father and a son in the aftermath of a devastating war. The Vetala puts before the King one more riddle as usual. The question stumps Vikrama. Satisfied, the Vetala allows himself to be taken to the Tantric ( Practitioner of Hindu Tantra).
On their way to the Tantric, Vetala tells the King his unfortunate story of how he became a Vetala.
‘Vikram Vetal’ in Hindi on Amazon India

‘Vikram & the Vampire’ on Amazon India, including books by Sir Richard Burton : Click to buy
( Disclaimer : All images featured in this Blog-post, are the property of their respective owners. Our deepest sense of gratitude to all of them for making this gigantic project a reality. If you see your picture anywhere in this Blog and don’t want it here, send us a message with the details and the link to the picture, and we will remove it right away. But at the outset, I just want to let my dearest readers know, that the noble purpose of this Blog, is to promote ‘The Glorious Cultural Heritage of India’ worldwide, to every nook & corner of the planet, and I would immensely love to see every single one of us, of Indian origin, passionately participating in this Mega-Project. I am right now in the process of adding the web-links to the sources of the innumerable images in this Blog. Till the work reaches completion, I would request the readers to use ‘Google Image Search’ to trace the source / multiple sources of these images on the web. The rich text contents througout this blog are based on well-researched aggregated and curated content from innumerable sources. But mostly and most importantly, these contents are based on my own personal experience of untiringly exploring the glorious cultural heritage India, and the ageless timeless ethnic arts, crafts, textiles, temples etc of the whole of India, during my stay across the length and breadth of this vast expansive Indian subcontinent for more than 5 decades of my long adventurous life. I have expressed my deepest gratitude to all the text sources on the ‘World-Wide-Web’, that have hugely contributed and added to my existing database of knowledge on this subject, by inserting appropriate hyperlinks throughout this blog, to connect my ardent readers from across the globe, to these rich sources of information on India’s heritage. So Long, Mala Chandrashekhar )