The Gita Press is the world’s largest publisher of Hindu religious texts. It is located in Gorakhpur city in the north Indian state of  Uttar Pradesh. It was founded in 1923 by Jaya Dayal Goyandka and Ghanshyam Das Jalan for promoting the principles of India’s  Sanatana Dharma. Hanuman Prasad Poddar was the founding and the lifetime editor of its noted magazine. 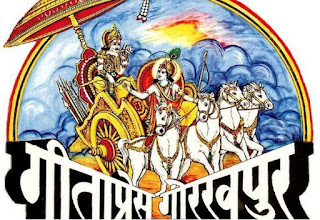 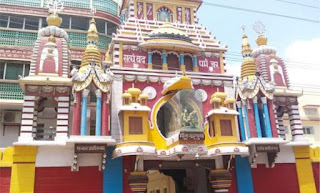 Above : Gita Press Gate, with its pillars inspired by the cave temples of Ellora, & the Gopuram, inspired by Meenakshi Temple, Madurai

Below : Here are a few book shops of ‘Gita Press Gorakhpur’ in different  locations around India : 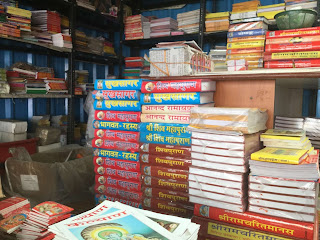 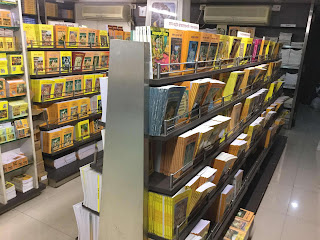 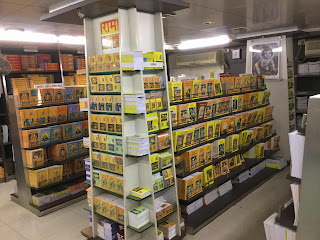 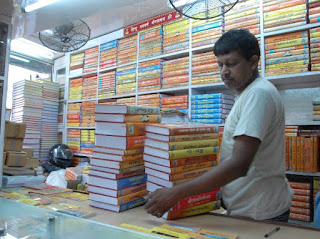 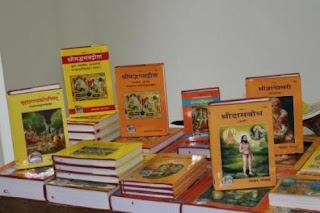 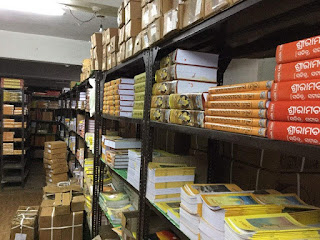 Gita Press started publishing in 1927, with a circulation of 1,600 copies and in 2012 its print order had reached 2.5 lakhs. The Gita Press archives contain over 3,500 manuscripts including over 100 interpretations of the Universal Scripture Bhagawad Gita.

The Bhagavad Gita preachers Seth Jaya Dayal Goyandka, Shri Hanuman Prasad Poddar and Shri Ghanshyam Das Jalan set up the Gita Press on 29 April 1923, as a unit of Gobind Bhawan Karyalaya registered under the Societies Registration Act, 1860, which is presently governed by the West Bengal Societies Act, 1960. Five months later it acquired its first printing machine for Rs 600. Since its establishment, the Gita Press has published approximately 410 million copies of the Bhagavad Gita (in different editions) and 70.0 million copies of the Ramcharitamanas, at subsidized prices.

The Press was temporarily shut down in December 2014 over wage issues, but the work resumed peacefully a few days later.

Neither of these spiritual magazines display any advertisements.

These texts are published in Sanskrit & Hindi, and in major regional languages of India like Marathi, Kannada, Tamil, Telugu, Gujarati, Bengali, Oriya and others.They publish in English language as well these days

Gita Press has branches and stalls in many locations acroos India. Many of the stalls are operated in railway platforms.

Learn more about Gita Press on Wikipedia by clicking here

( Disclaimer : All images featured in this Blog-post, are the property of their respective owners. Our deepest sense of gratitude to all of them for making this gigantic project a reality. If you see your picture anywhere in this Blog and don’t want it here, send us a message with the details and the link to the picture, and we will remove it right away. But at the outset, I just want to let my dearest readers know, that the noble purpose of this Blog, is to promote ‘The Glorious Cultural Heritage of India’ worldwide, to every nook & corner of the planet, and I would immensely love to see every single one of us, of Indian origin, passionately participating in this Mega-Project. I am right now in the process of adding the web-links to the sources of the innumerable images in this Blog. Till the work reaches completion, I would request the readers to use ‘Google Image Search’ to trace the source / multiple sources of these images on the web. The rich text contents througout this blog are based on well-researched aggregated and curated content from innumerable sources. But mostly and most importantly, these contents are based on my own personal experience of untiringly exploring the glorious cultural heritage India, and the ageless timeless ethnic arts, crafts, textiles, temples etc of the whole of India, during my stay across the length and breadth of this vast expansive Indian subcontinent for more than 5 decades of my long adventurous life. I have expressed my deepest gratitude to all the text sources on the ‘World-Wide-Web’, that have hugely contributed and added to my existing database of knowledge on this subject, by inserting appropriate hyperlinks throughout this blog, to connect my ardent readers from across the globe, to these rich sources of information on India’s heritage. So Long, Mala Chandrashekhar )