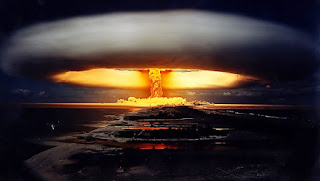 In ancient Sanskrit writings, the Brahmastra (Sanskrit: ब्रह्‍मास्‍त्र ) was a weapon created by Brahma.

It is sometimes known as the Brahma Astra (Astra means ‘weapon’). As described in a number of the Hindu Puranas ( Mythology ), it was considered the deadliest weapon. It was said that when the Brahmastra was discharged, there was neither a counter attack nor a defense that could stop it, exce

pt by Brahmadanda, a stick also created by Brahma. The Brahmastra never missed its mark and had to be used with very specific intent against an individual enemy or army, as the target would face complete annihilation. It was believed to be obtained by meditating on the Creator in the Vedas, Lord Brahma; it could only be used once in a lifetime. The user would have to display immense mental concentration. According to ancient Sanskrit writings, the Brahmastra is invoked by a Mantra (a key phrase or invocation ) that is bestowed upon the user when given this weapon. Through this invocation the user can call upon the weapon and use it via a medium against his adversary.

Since Brahma is considered the Creator in Sanatana Dharma ( Meaning Universal Religion in Hinduism ), it is believed by Hindus that Brahmastra was created by him for the purpose of upholding Dharma ( Righteousness )and Satya ( Truth ), to be used by anyone who wished to destroy an enemy, who was unrighteous and untruthful. The target, when hit by Brahmastra, would be utterly destroyed.

The weapon was also believed to cause severe environmental damage. The land where the weapon was used became barren and all life in and around that area ceased to exist, as both women and men became infertile. There was also a severe decrease in rainfall with the land developing cracks, like in a drought.

Goodness gracious, I wonder if this Brahmasthra was what we call Nuclear Missile in today’s scientific term.!!!…..And this Brahmadanda, is it what we call Anti Ballistic Missile Today?

Does all this mean, ancient Hindus had all these knowledge?