Tamil Nadu is known for its traditional ornate paintings, known as  Tanjore or Thanjavur paintings. This is an important form of classical South Indian painting, native to the town of Tanjore, which is about 300Km from Chennai, in the South Indian State of Tamil Nadu. The art form dates back to the early 16th Century and is internationally known for its elegance, rich colors, and tremendous attention to detail. tremendous attention to detail.

Interested in buying these timeless Tanjore Paintings? And giving global recognition to the creativity of the brilliant craftsmen of India? Here are a few paintings for you to choose from, collected from various sources, with heartiest thanks to the dedicated artists of these creations, and the brilliant photographers who’ve presented these artpieces to the world: 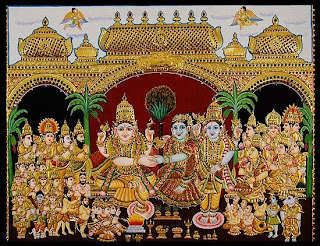 The majestic temple architecture of ‘Gopurams’ (towers) is not only an engineering marvel but also reflects the dexterity of its mesmerizing sculpture. The ancient intricate work on stone still remains an enigma to the viewers and historians. These Gopurams have withstood the ravages of time and stands testimony to mastery of Tanjore craft and architecture prevalent during the medieval Chola Empire. Craft and art associated with architecture or other creative faculties of expression were essentially based on the culture prevailing then in South India. Manifestations in the form of temples and art relating to God based themes, were a result of the ‘Bhakthi’ culture (which was best represented by the Hindus with their soul-stirring devotion to God) prevalent in those days during Chola period.

Tanjore paintings have decorated the walls of temples, palaces, homes and other places since the time of Chola regime (17th century). Deeply rooted in ancient Hindu tradition, Tanjore paintings depict divine Gods and Goddesses of Hindu pantheon in extremely rich vibrant colours.
Notable for adornment of semi-precious stones and 22 karat gold foils, the creation of a Tanjore painting involves a lot of dedication and several stages of meticulous artwork.
The themes for most of these paintings are Hindu Gods and Goddesses and scenes from Hindu mythology. The portrayal of figures in these paintings is breathtakingly brilliant. The early paintings were embedded with real diamonds, rubies and other precious stones. Presently, pure gold foils and semi precious stones are used to adorn the paintings.
A typical Tanjore painting of about 10’’x12’’ in size costs approximately $200. The pictures are of various sizes, ranging from huge works spanning whole walls to small miniatures no longer than 6-inch square!! These paintings which could once only be seen in temples and palaces, now beautify the living rooms of people, and the lobbies of hotels and corporate offices.
Tanjore paintings have a very rich heritage. The paintings are notable for their adornment in the form of semi-precious stones, pearls and gold. The rich vibrant colors, dashes of gold, semi-precious stones and fine artistic work are characteristics of these paintings. They add immense beauty and culture to a variety of surroundings and décor. The paintings are mostly of Hindu Gods and Goddesses, because this art of painting flourished at a time when strikingly beautiful temples were being constructed by the rulers of several dynasties in South India.

Crafted with meticulous care and detail, the pictures are unique. What sets them apart from Indian paintings in general are the embellishments made over the basic drawings with precious and semi-precious stones as well as the relief work which gives them a three dimensional effect.